But if you're interested in what the Department of Economic Affairs of India has to say about cryptocurrency, you can check out the signed report and bill that will be presented to Central Government for their verdict from this link: https://dea.gov.in/sites/default/files/Approved%20and%20Signed%20Report%20and%20Bill%20of%20IMC%20on%20VCs%2028%20Feb%202019.pdf

Anyway moving on to the topic in hand, since this is not a political blog and I'm not interested in pointing out the inadequacy of our ministers, let's check out how can a noman mine cryptocurrency and what is the future of cryptocurrency?


The accountability of cryptocurrency is dependent on the miners that act as a witness to a transaction. These witnesses in return for their service receive a small share of the transaction.


These transactions are based on encrypted data being passed over and over again to maintain a form of the ledger.


Which is why the difficulty of solving an encryption problem over time becomes more and more difficult ultimately saturating the total amount of a certain cryptocurrency that can be generated under feasible circumstances.

This saturation decides the market cap of a cryptocurrency.


Where do all these transactions come from?

On a higher level, you can see it as

Vendors request for hash power for solving problems. In return for this hash power, the miners receive a small share of the transaction.

How can one mine cryptocurrency?

First, there are a number of cryptocurrencies out there. To mine a certain cryptocurrency you need to download its wallet and their respective miner and join a mining pool. To understand it better you can go to the website of your favourite cryptocurrency and find their wallet software, miner and mining pool from there. You will also find proper guide respective to their miner there only. You can understand which cryptocurrency would be more profitable with respect to your system/mining rig by checking profitability on whattomine.com and other such websites.

An easier way to mine cryptocurrency is to use a mining platform that manages algorithms, wallet and mining pool for you.

Nicehash, Cudominer, Minergate, Awesome Miner are examples of such platforms.

All you have to do to get started is just sign up on their website, download their software and use the bitcoin address they provide to mine using that software.

What happens when you've mined cryptocurrency?

Now the sole purpose of earning money is to be able to use it buy something. Once you have cryptocurrency in your wallet. There are quite a few websites that accept cryptocurrency as a payment gateway. Mining platforms mentioned above also have the option to transfer your money to digital currency exchange like Coinbase.

What is the future of cryptocurrency?

Even though it might seem that the Department of Economic Affairs, India might be against cryptocurrency but they also understand the viability of the same. To quote


"The Government does not consider crypto-currencies legal tender or coin and will take all measures to eliminate use of these cryptoassets in financing illegitimate activities or as part of the payment system. The Government will explore use of block chain technology proactively for ushering in digital economy."


There's still a hope for cryptocurrency maybe not in the near future but definitely in a distant one.

Throwback to my post back in 2018  https://www.shiftescape.com/2018/09/how-to-abuse-batlepass-dota-2.html But this time things have changed immensely. Contrary to previous year's Battle Pass this year the grinding process is next to useless.  In previous Battle Pass's you could recycle your immortals for Battle Points/Level which has been completely removed and replaced with the absurd Valve inc. R.N.G. Powered Side Shop where you play a DOTA AutoChess/Underlord kind of game with the characters you roll and sell them for a value which could be used for another chance based Treasure, Bundle, Gauntlet Ticket, Arcana and courier/announcers. Also, as good as the Battle Pass this year is, there's no way to get anything over the immortals without paying up. At the same time, you get way better items compared to previous Battle Pass if you're paying about 200-220$ with some grinding.  Anyway, having bought the Battle Pass you have contributed the prize pool so congratulate you 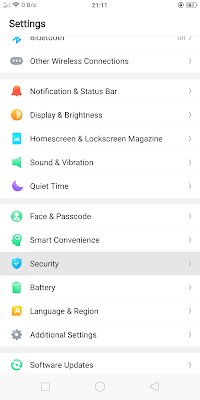 This one application gives the vibes of a malware. I'm using Oppo Realme 1 and noticed TouchPal 2018 icon on my home screen out of nowhere. I have no memory of installing it, nor I suspect any application I have installed that would do it. So I highly doubt the guys at Oppo are behind this. I have my concerns on what this might actually be doing on my phone. Then I went on to delete/uninstall it, but to my surprise, it just won't leave my phone. This little step by step process will help you remove TouchPal from your Oppo Realme. I have also attached the screenshots to help you further in case of a language barrier. Go to Settings and click on Security. Click on Permissions and switch to Apps tab to manage permissions granted to Applications on your phone. Find TouchPal 2018 and make sure all of the permissions to this app are put on Forbid. Go back to Home screen, press and hold TouchPal 2018 icon and click on Delete.

If you're streaming a certain game and decide to play a different game mid-stream you might want to change the name of game you're streaming in YouTube description. But where's the option? Well, it's fairly simple yet utterly stupid of YouTube not give the option where it should be. The option is actually in the Dashboard and not present in the video manager where it should(also) be. Now in order to change the game name in your stream head to YouTube Dashboard by clicking other features > More. Or you can also click this link .   https://www.youtube.com/dashboard?ar=1&o=U Now click on LIVE STREAMING in the left menu and you should be able to edit the game you're streaming.